The Church of St Mary, Northolt probably marks the site where pre-Christian Saxons settled in the seventh century. ‘Northolt’ comes from an Anglo-Saxon names meaning ‘the northern neck of land’. When Christianity came to the area a wooden church would have been built, probably in the eleventh century. The Domesday Book of 1086 mentions that Geoffrey de Mandeville had held ‘Northala’, as it had become known, since the Norman Conquest. At that time there was a priest who had about sixty acres of land and (presumably) a house.

The current building dates back to 1230 in parts. The building, like all buildings has been added to and changed through the years to suit those worshipping in it. A chancel and sanctuary was added in the 1500’s, a gallery for musicians in 1703 and a vestry added in the 1950’s. More recently it was extensively restored thanks to generous funding during 2006-8 and re-dedicated by the Bishop of London at the end of this in November 2008.

Click on image below to read more about the history of the church. 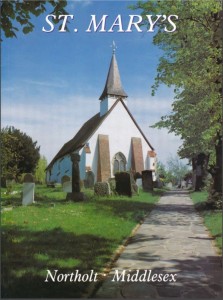 tuated on the Racecourse Estate, and yes it did used to be a racecourse, for pony racing, which was opened in 1929. The pony racing stopped during the Second World War, and failed to start again afterwards.
The Racecourse Estate began construction at the beginning of the 1950’s in order to solve a severe housing shortage within the borough. The building we have as St Richard’s was completed in 1956.

There was a church meeting on the estate before this however, first meeting in a boys brigade hut, and then in Northolt High School, before moving to the new built hall.
The building was always meant to be a hall, for a large church building, but this never got built. Instead a small chapel was built on the side of the hall in the 1980’s, with sliding doors that meant the the space could be bigger or smaller depending on the need.
St Richard’s is pleased to host a nursery during the week in the hall which is of great benefit to the community.

There are no upcoming events at this time.